Back to the Future – are we nearly there yet? 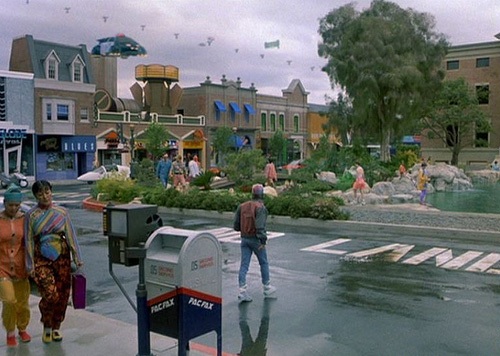 Hoverboards, self-tying shoelaces, and auto-adjusting sleeves – these are just a few of the innovations predicted in the iconic 1989 film Back to the Future Part II, in which Marty McFly (Michael J. Fox) travels forward in time to 21 October 2015. To celebrate Back to the Future day, Horizon looks at which predictions came true, and which are in development by European researchers.

While we can talk to people through our TVs and watch videos through our glasses, our version of 2015 notably does not include flying cars and hoverboards. But, would you settle for a personal helicopter to transform your commute? Researchers in Germany are preparing the groundwork for personal helicopters that could lift people out of crowded city streets and help commuters to make use of Europe’s vertical space for their journeys to work.

To get back to the past, Doc Brown just chucks some litter into the Mr Fusion energy converter and his time machine is ready to take to the sky. While instant biofuel is not yet at our fingertips, EU research is accelerating towards using waste as fuel. The recently started BFSJ project is building a demonstration plant which makes jet fuel from wood and other biomass, such as ethanol from municipal solid waste.

In downtown Hill Valley, Marty McFly enjoys a holographic version of Jaws 19 in the Holomax Theater. In the real 2015, 3D films are all the rage but for the moment we still have to put on special glasses to get the effects. However, researchers are working to develop 3D screens which could eliminate the need for us to wear 3D glasses.

Back to the Future may envision a 2015 where clothes automatically adjust to the wearer’s size, but in reality scientists are working on jeans that can charge your phone, bandages that emit light to encourage healing, and a dress that can read its wearer’s mind.

Thankfully for our waistlines, automatic dog-walking leads are not yet a reality and we still have to accompany our pets for their daily walks. However, we may soon have a robot that could undertake other pedestrian-based tasks on our behalf. The EU-funded EUROPA2 project is developing the foundations for service robots that can autonomously navigate in urban environments to deliver things to people or guide blind people around a city.

Self-tying shoelaces may have always been a slightly redundant imaginary invention, given the existence of both Velcro and slip-on shoes. However, in the real 2015, shoes are becoming smarter in ways that even Back to the Future didn’t imagine. Researchers on the RUNSAFER and WI-SHOE projects are developing intelligent running shoes that can analyse the runner’s gait and give feedback on the likelihood of injury, as well as tracking how far and fast they’re going.