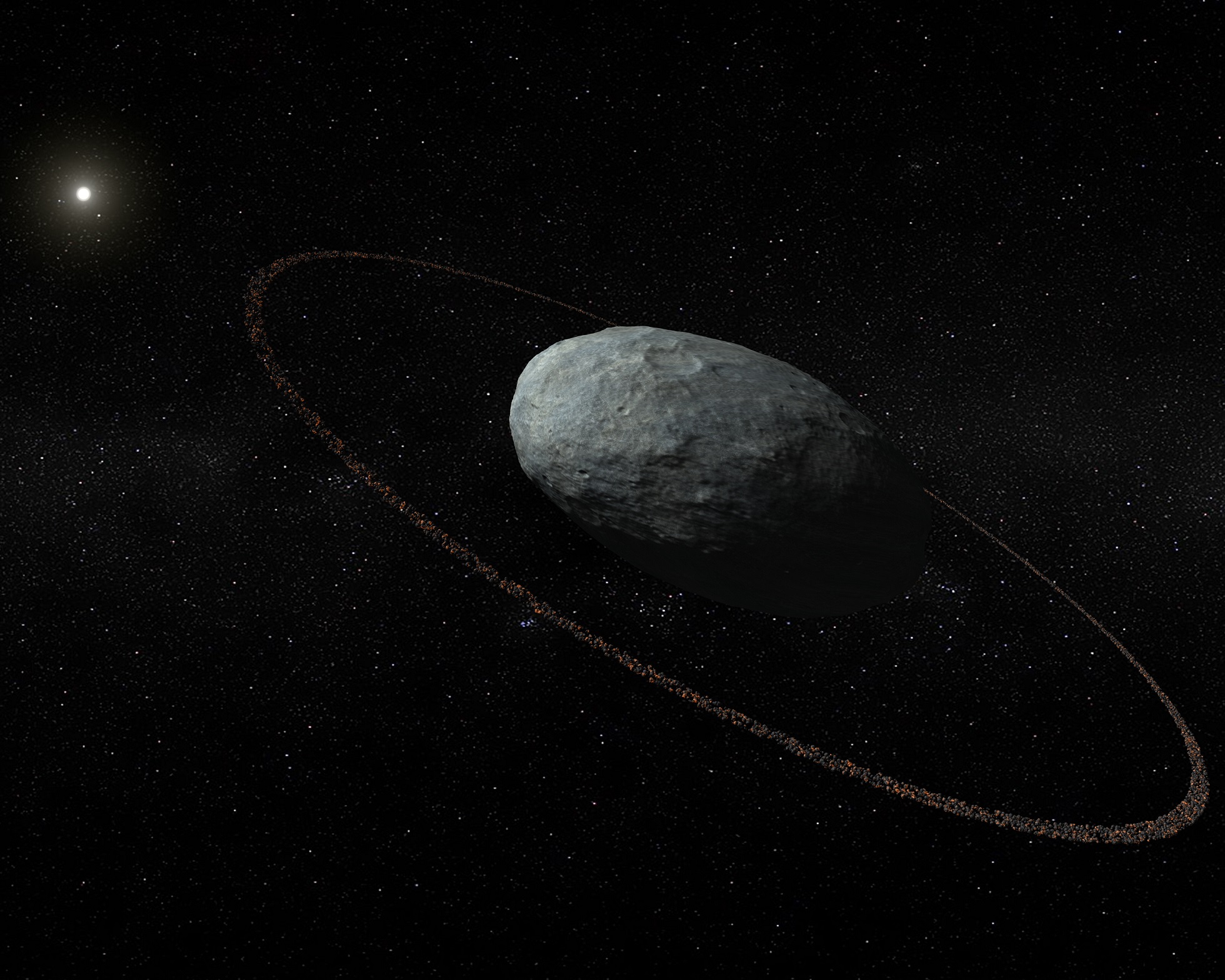 Egg-shaped Haumea was discovered in 2004 but astronomers have just been able to establish that it has a ring. Image credit - IAA-CSIC/ UHU

Orbiting the sun from far beyond planet Neptune, the recently discovered planetoid Haumea is a fast-spinning elongated object, completing one rotation every four hours. Now, following fresh observations, astronomers have discovered this dwarf planet also has a ring system in orbit around it.

It's the first time a ring structure has been identified around an object beyond Neptune.

Haumea, which was officially discovered in 2005, has an unusual egg-shaped structure, which it gets from having such a high rate of spin. This stretches it out, making it more oblong than spherical. It is one of five recognised dwarf planets, along with Ceres, Pluto, Eris and Makemake.

Now, not only have astronomers seen a ring system around a trans-Neptunian object (TNO) for the first time, they have also determined that the ring has a radius of about 2,287 kilometres, a width of 70 kilometres and rotates around Haumea at a rate that is three times slower than the planetoid itself.

To make this discovery, astronomers relied on measurements taken during an event known as occultation, where one object is hidden behind another.

‘When the light of a star is blocked by a solar system object we can measure how long that takes and hence we can determine the size of the object that causes the occultation because we know the speed of the body on its orbit,’ explained Dr José-Luis Ortiz, research scientist at the Instituto Astrofísica Andalucía, in Granada, Spain.

He and fellow scientists used an occultation event in January 2017 to find out more about the structure of Haumea. Their work was part of the LUCKY STAR project, funded by the EU's European Research Council and led by Professor Bruno Sicardy.

‘From the occultation observation, we determined what we call chords (a line crossing an object formed by an occultation event) by counting the number of seconds that the light from the star was gone and multiplying that by the known speed of Haumea with respect to us,’ said Dr Ortiz.

‘Each chord from each observatory can be projected in the plane of the sky and this allows us to determine the total size and approximate shape of the body that caused the occultation,’ he added.

From this the astronomers were able to determine the object's shape, density, the fact that it has no atmosphere, and the ring in orbit around it. The ring system lies on the same plane as Haumea’s equator.

‘It was very exciting to make predictions that finally led to a successful observation from which plenty of good science emerged.’

Dr José-Luis Ortiz, the Institute of Astrophysics of Andalusia, Spain

Dr Ortiz added: ‘It was very exciting to make predictions that finally led to a successful observation from which plenty of good science emerged. After the thrill of achieving a great success from a huge effort, we were rewarded with nice results that after careful analysis gave us plenty of surprises.’

LUCKY STAR worked alongside another EU-funded project, Small Bodies Near and Far (SBNAF), to predict Haumea’s path. Based on these predictions, researchers arranged 12 telescopes in 10 different laboratories around Europe to point to its location at the key moment when the planetoid was due to cross paths with star URAT1 533-182543. From this, they were able to observe its characteristics, gather data and detect the planetary ring system.

The EU funding made it possible for these projects to make such a discovery, with nearly EUR 2.5 million allocated to LUCKY STAR and over EUR 1.5 million for SBNAF.

Dr Thomas Müller, group leader of SBNAF and research assistant from the Max-Planck Institute for Extraterrestrial Physics, Germany, said: ‘The discovery was possible through the hard work, enthusiasm, and dedication of a few individuals.’

He says that while occultation techniques have been known for a long time, with many successful measurements being made in the 20th century, it is only in the last few years that objects in the outer solar system have been predictable, and that Haumea is the most impressive and best observed event thus far for a TNO.

Dr Müller said: ‘Since its discovery more than 10 years ago we (have) pushed for more observations with the most powerful telescopes on earth and in space, but (it) is fantastic to see that a coordinated campaign of observers with small- to medium-sized telescopes has now made the most spectacular contribution to our understanding of Haumea and the world of icy dwarf planets beyond Neptune.’

The new findings may also mean that Haumea is no longer classified as a dwarf planet. Objects must fulfil two criteria for this status - they must orbit the sun and assume a nearly round shape - and the recent observations throw the second condition into doubt.

Dr Müller adds that there are many more things to do now, including the reinterpretation of existing measurements and theoretical studies of ring formation in TNOs and solar system evolution scenarios.

It takes 285 Earth years to orbit the sun.

Officially named Haumea in 2008, its name comes from the Hawaiian goddess of childbirth and fertility. The two moons are named after Haumea’s children: Hi’aka is the patron goddess of the island of Hawaii and hula dancers and Namaka is a water spirit.

It is thought the ring and moons were formed following an impact in the past.