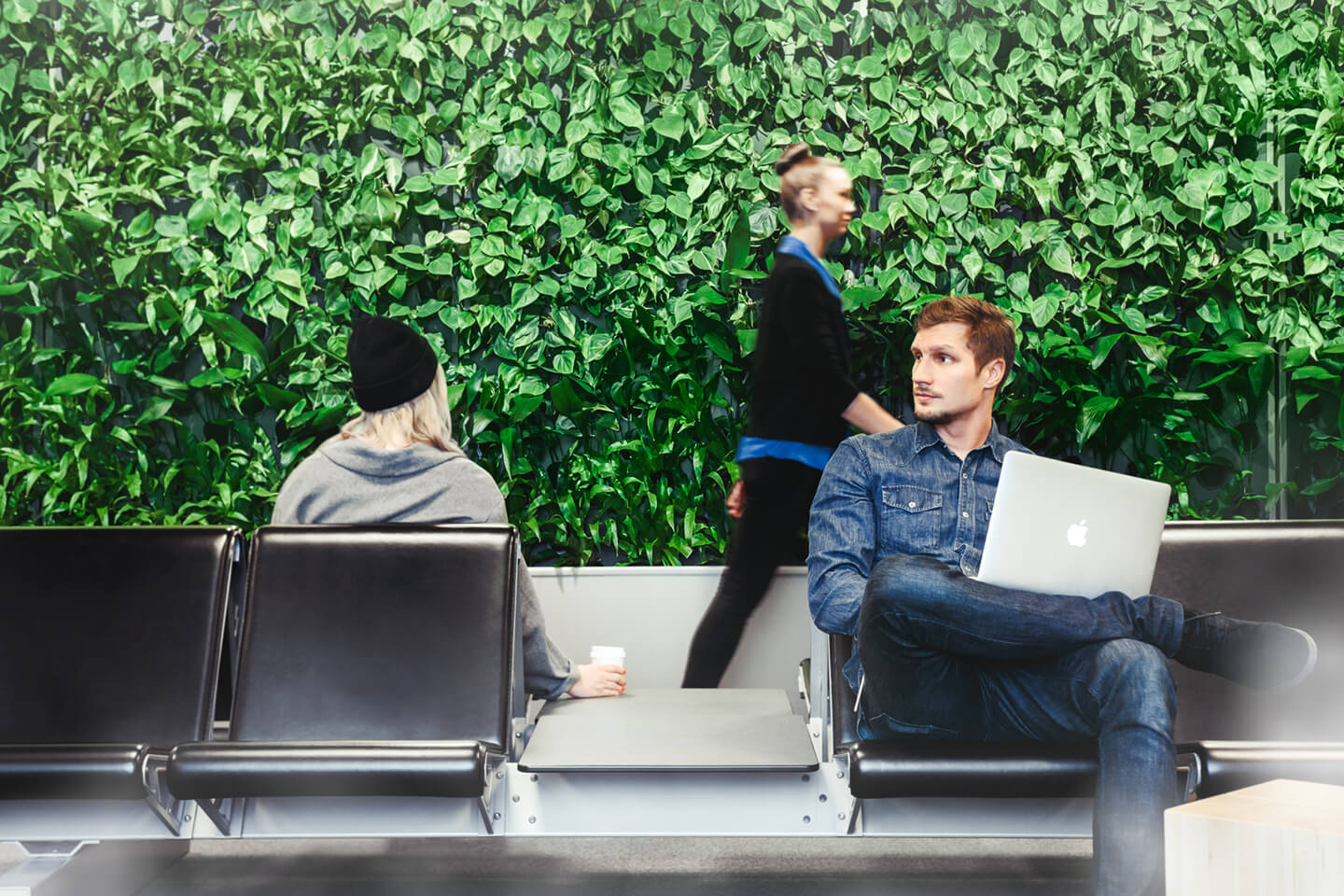 In an office environment, the air could contain over 300 chemicals, according to NAAVA founder Niko Järvinen. Image credit-NAAVA

The air in our offices and homes can contain a higher mix of chemicals than outdoors, but next-generation purifiers - including one that uses plants as natural biofilters and another that turns pollutants into water and carbon dioxide - are aiming to absorb the harmful particles and let us all breathe a bit easier.

Detergents, tobacco, cosmetics, new furniture, paints, printers and even pets – all these release different chemicals that millions of people breathe on a daily basis. Some are harmless, but others can cause a wide range of short- and long-term health problems, from eye irritation and headaches to heart problems and cancer.

Järvinen says that limits of acceptable exposure to indoor pollutants are ‘at best’ decided by researching a single chemical’s impact on our health. But this approach doesn’t consider the potential health effects when different chemicals interact with each other – which could change a chemical’s level of toxicity and pose a greater risk to humans.

‘For chemicals being used commercially there is usually info available when they are harmful to health in terms of six, eight or ten hours,’ said Järvinen. ‘They never take into account if you have two, three or a hundred chemicals (in the air at the same time).’

In an office environment the air could contain over 300 chemicals, adds Järvinen, but the risk isn’t coming from the amount of chemicals – it is more from the mix, because it is harder to tell if a perceived safe chemical has interacted with other chemicals and become harmful.

What’s more, there is a trend of building offices that are sealed in, meaning they rely on ventilation systems circulating air through filters rather than someone opening the window to let fresh air in.

‘In the past we were able to open the windows if the ventilation system was not working efficiently enough, nowadays that’s not possible and you can’t generally update a ventilation system (because it is so expensive),’ said Järvinen.

As part of a research project called Naturbo, Naava refined a series of air-cleaning walls which use plants as a biofilter. Specific plants chosen for their purification potential absorb the dirty indoor air which is then broken down by microbes in their roots. Naava uses a soilless growth system to stimulate microbe activity and then a fan blows the cleaned air back into a room.

According to Järvinen, a study carried out by the University of Eastern Finland and University of Jyväskylä on the purification efficiency of a single Naava biofilter against a static potted houseplant found that chemical concentrations were nearly non-existent in an hour within a test chamber, while, in the same time, the potted plant had not removed 80% of the chemicals.

‘Indoor air is much more polluted than outdoors because of the additional chemicals we use inside.’

Rather than create a completely sterile space, however, the aim is to recreate an environment that is found in nature.

Järvinen says you can find 30-50 natural chemicals in forest air depending on location and time of the year, such as phytoncide, an organic compound which can boost the immune system. Naava studied Finnish forests and used them as a reference point in terms of what clean air should be and aims to recreate it through their products.

Järvinen hopes this approach will ensure safe air in an indoor environment, but he says that just because more scientific work is needed to understand indoor air pollution, he doesn’t think everyone should start panicking.

‘People shouldn’t be afraid, it is understanding this (that) is a huge unknown and in the end it might not matter at all, but at the same time we need to admit we don’t know enough,’ he said.

Improving public awareness is a key issue in minimising indoor air pollution, according to Dr Burcu Güvenatam, an air quality specialist from Arçelik A.Ş, a Turkish research and development business based in Istanbul.

‘Indoor air is much more polluted than outdoors because of the additional chemicals we use inside,’ she said. ‘People are not aware that the products they are using contain many chemicals that they breathe every second.’

This is significant because the average European spends 90% of their time inside.

With increased public awareness comes more informed consumers that can drive demand for cleaner products from different industries, but in the meantime, there is a need for purification technology to ensure that the air at home and in work is safe to breathe.

Dr Güvenatam is working on another next-generation air purifier which uses a process called photocatalytic oxidation (PCO). This is a process that combines light and a semiconductor material called titanium dioxide which causes a reaction that can quickly absorb chemicals from the air and convert pollutants into carbon dioxide and water.

PCO systems work by blowing indoor air into a device where the light-based chemical reaction can take place, but Dr Güvenatam says that during the course of the reaction harmful airborne pollutants might also be formed.

‘If we cannot optimise PCO systems we could release intermediate products which could be much more hazardous (than the dirty air it is trying to clean),’ she said.

For example, a poorly designed PCO system could release formaldehyde, a harmful type of chemical known as a volatile organic compound, that could affect the nervous system as well as cause cancer.

However, Dr Güvenatam says that the process behind PCO is complicated and needs more investigation. ‘Reaction mechanisms of PCO technology on air purification is not fully understood yet,’ she said.

Through a research project called nanoPhotoMat, Dr Güvenatam is aiming to understand more about how by-products of the reaction are formed and degrade, in order to make safer photocatalytic materials that promote effective removal of these compounds, and other pollutants, under the illumination of visible light.

Although the project is running until 2019, the team has already developed a prototype which they are already trialling in some of Arçelik’s meeting rooms.

‘In my lab we are testing various filtering materials and different technological solutions that can deal with volatile organic compounds,’ she said.

‘All these volatile organic compounds stick to our skin and are absorbed and when we breathe we take them into our brain and lungs. It is very important for us to optimise the system very well.’

The lead of this article was updated on 4 September to highlight that the Naava system uses plants as natural bio-filters.