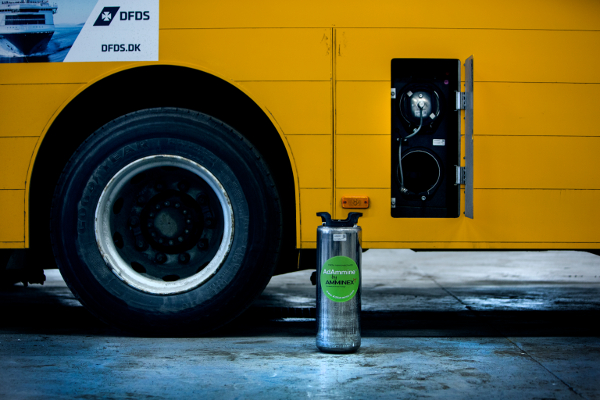 Researchers are looking at ways to reduce cars’ nitrogen oxides, which contribute to greenhouse gas emissions. Image courtesy of Amminex

Tanks of solid ammonia, see-through motors and hybrid engines are just some of the technologies that are helping bring diesel pollution down to record-breaking lows.

Noxious nitrogen oxides given off by diesel cars are believed to increase the incidence of lung and cardiac conditions in big cities.

Transport is responsible for around a quarter of all EU greenhouse gas emissions and is the only sector in the EU to have higher levels in 2012 than in 1990.

The largest part of this is trucks and buses, which account for a quarter of emissions from road transport in the EU. High road-freight traffic means heavy-duty vehicle emissions are still on the rise despite improvements in fuel consumption.

Last year German carmaker Volkswagen hit headlines after US regulators accused it of including software in many of its 2.0 litre engines to circumvent emissions standards for nitrogen oxides.

However, researchers in Denmark have already started testing technology that has cut back nitrogen oxide emissions by over 90 % in city buses by using ammonia salts.

According to Dr Ulrich Quaade, head of research and development at technology firm Amminex in Søborg, Denmark, progress of this kind is putting diesel vehicles back on the road to environmental sustainability.

‘Internal combustion engines have historically faced a trade-off between reducing their impact on the climate and on public health,’ said Dr Quaade.

While diesel engines are up to 50 % more fuel-efficient than their petrol counterparts, meaning they emit less greenhouse gas, they also produce more by-products such as nitrogen oxides that are directly harmful to people’s health.

Although stricter legislation across the EU has cut nitrogen oxide emissions by 30 % over the past decade, reductions have largely come at the expense of diesel engine efficiency.

‘Vehicles can split nitrogen oxides into harmless nitrogen and oxygen, but to do so they need to inject liquid urea into their exhaust system at high temperatures,’ said Dr Quaade. ‘Heating the exhaust fumes burns fuel and hence releases more greenhouse gases.’

Amminex has developed a novel filtering approach by solidifying ammonium into stable salts that can be injected at exhaust temperatures commonly encountered in urban traffic.

‘By no longer having to heat the exhaust, we can reduce both the carbon footprint and the nitrogen oxide emissions of the engine at the same time,’ said Dr Quaade.

Last year, Amminex retrofitted 250 buses in Copenhagen with tanks of solid ammonia, reducing their nitrogen oxide emissions by over 90 %.

To probe the performance of the technology under representative driving conditions, Amminex uses on-board instruments that follow the buses as they drive their daily routes and broadcast their measurements through a publicly downloadable app called NOxTracker.

EU funds are allowing the company to build on this knowledge and adapt the technology to the broader automotive sector.

‘We are making our nitrogen oxide filtering system more compact and tailoring it to passenger vehicle driving patterns,’ said Dr Quaade. ‘Smaller diesel cars represent the largest market for us, but these vehicles have a completely different operating strategy to the trucks and buses that we have worked with so far.’

Diesel engine flexibility lies at the heart of research performed by Professor Maria Founti at the National Technical University of Athens in Greece. Her team investigates how fuel blends combust in technologies ranging from the diesel motors that fit inside passenger cars to the 1 000-tonne behemoths propelling international cargo ships.

‘Some of our students are working with engines built from transparent materials that allow lasers to probe live combustion processes in molecular detail,’ said Prof. Founti. She expects that fundamental interdisciplinary research can help bridge the communication gap between diesel engine developers, in particular across the automotive and marine transport sectors.

‘We can reduce both the carbon footprint and the nitrogen oxide emissions.’

Prof. Founti sees an opportunity for diesel vehicles of all kinds to meet increasingly ambitious environmental regulations through closer collaboration across a deeply fragmented industry.

The ECCO-MATE International Training Network that she coordinates is funding a generation of young scientists to pursue interdisciplinary research at some of Europe’s leading engineering departments on topics of broad generic interest such as fuel chemistry and injection dynamics.

The Swedish start-up CIMCO Marine is among the first to reach across this disciplinary divide. In recent years, the company has developed a technology called OXE-Diesel that combines a diesel car engine with marine propellers to produce an uncommonly robust, fuel-efficient and environmentally friendly outboard.

‘Most small watercraft are propelled by petrol engines based on 1940s technology,’ said Pim Polesie, vice president of the company. ‘We found that, with the right engineering, a diesel engine could do a better job for a fraction of the fuel.’

According to CIMCO Marine, regulated diesel engines from the automotive industry emit less greenhouse gas than marine outboards and could reduce the air pollutants that they release by a factor of 50. They also present lower fire hazards, higher torque and substantially longer lifetimes.

This year, the first OXE-Diesel prototype has attracted the attention of vessel operators interested in engine durability, such as law enforcement services and rescue operations. EU funding has allowed CIMCO Marine to perform a full feasibility study and Polesie expects that, by 2020, the company will be supplying one in every ten outboards sold worldwide in the commercial-scale market.

According to ECCO-MATE’s Prof. Founti, one of the main drivers behind recent advances in engine design has been environmental legislation. Emission targets have galvanised research across previously disconnected disciplines and guided research along unexplored avenues. As Europe pioneers regulatory reforms that protect both air quality and the climate, diesel engines will continue to evolve.