Age and foaming: how to predict when a volcano will erupt 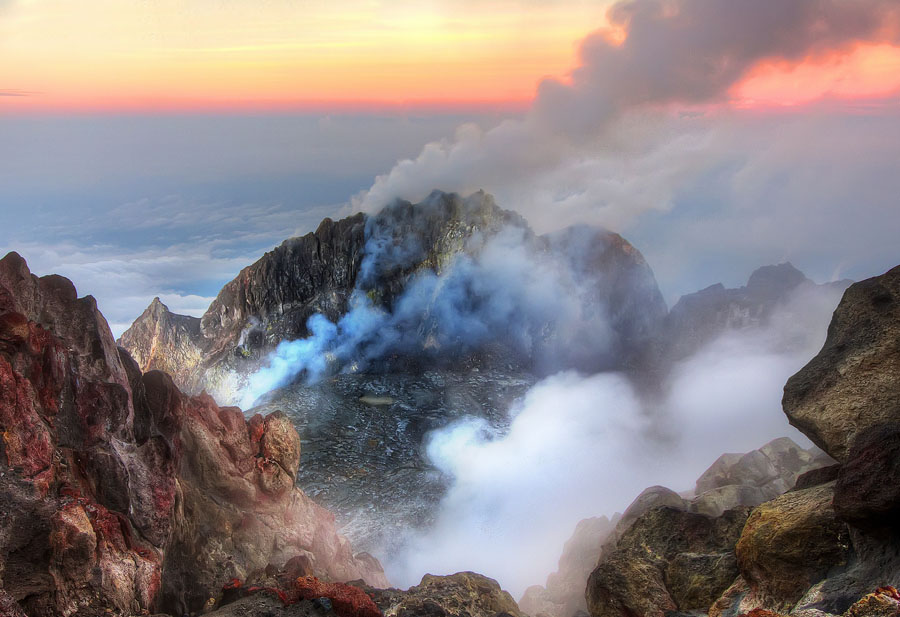 Findings about the effect of a volcano's age on its likelihood to erupt will be applied to the Merapi volcano in Indonesia, among others. Image credit - Jimmy McIntyre, licensed under CC BY-SA 2.0

The eruption of a volcano can have devastating consequences – killing people and destroying livelihoods, as well as releasing vast amounts of ash into the sky that disrupts air travel and alters the climate. Knowing what goes on underground, however, would facilitate better warnings for when an eruption will occur – and help save lives while keeping damage to a minimum.

‘Understanding volcanoes is an international effort. The impact of eruptions does not stop at borders,’ said volcanologist Dr Catherine Annen of the University Savoie Mont Blanc in France.

Though relatively small, the eruption of the Eyjafjallajökull volcano in southern Iceland in 2010 sticks in many people’s memories. Its drifting plume of ash led to the widespread cancellation of flights across Europe.

Today, other, bigger volcanoes seem to be on the brink of eruption. Seismic observations suggest that Italy’s Campi Flegrei, a supervolcano close to millions of people living in and around Naples, is amassing magma in a dangerous ‘hot zone’.

But such observations only give rough forecasts – usually days, weeks or months in advance – of when a volcano will erupt. ‘The uncertainty arises from the fact that we cannot see what is happening underground,’ said Dr Annen.

Scientists such as Dr Annen already have a fair idea of what goes on. Being less dense than surrounding rock, magma from deep within the Earth can rise up, potentially finding an outlet at thinner points – volcanoes – in the planet’s crust.

Magma cools as it rises, and if we are lucky it will freeze, or solidify, before ever erupting. On the other hand, the pressure close to the surface drops too, and this liberates dissolved gases, which increase the chances of a foaming explosion – a bit like opening a shaken fizzy drink bottle.

Dr Stephan Kolzenburg, a volcanologist at McGill University in Montreal, Canada, said: ‘These two processes – foaming and freezing – compete, and depending on which one wins, the volcano will or will not erupt.’

The foaming and solidification processes also lie at the heart of mathematical volcano models. Through a research project called DYNAVOLC, Dr Kolzenburg hopes that by better understanding the competition between the two processes, and by linking them to geophysical signals recorded on the Earth’s surface, he will be able to improve the hazard maps depicting the areas most likely to be affected by volcanic eruptions.

Although his research project only began in April, it has already yielded results. In one study, Dr Kolzenburg found that the faster magma and lava flows, the faster it solidifies – knowledge that could improve the volcano models.

Not all volcanoes behave in the same way, however. Having had longer to store magma, old volcanoes tend to be hotter than young volcanoes, and this determines, for instance, the level of ground swelling close to eruption.

Dr Annen is interested in how a volcano’s age affects this and other potential warning signals. Through a project called MAGMATS, she is simulating on computers the interaction of magma and gases to understand how key volcano parameters change over thousands to hundreds of thousands of years.

‘Understanding volcanoes is an international effort.’

Such parameters include temperature, gas content and magma content – none of which vary in a simple, linear fashion with one another. ‘Simulating the processes is challenging,’ she said.

Nevertheless, the work should help the prediction of an eruption to be better tailored to a volcano’s age – and thus more accurate. Dr Annen hopes to apply her findings to four active volcanoes: Campi Flegrei in Italy, Uturunku in Bolivia, Merapi in Indonesia and Krafla in Iceland.

‘I would like to know if there are large volumes of magma ready to erupt close to the surface – or if, on the contrary, any eruption must first involve new magma transfer from deeper levels,’ she said. Ultimately, she hopes that ‘any decision about evacuation will be better informed.’