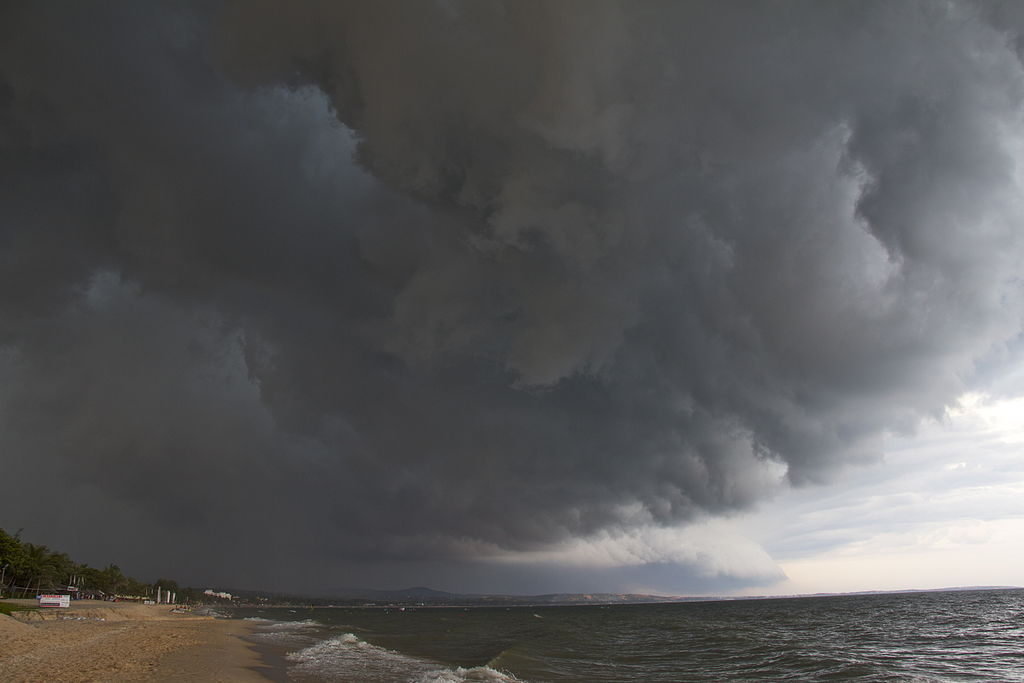 Monsoons occur throughout the tropics and sub-tropics but scientists are still uncertain about how climate change will affect them. Image credit - Jean-Marie Hullot/Wikimedia Commons, licensed under CC BY 3.0

A fine layer of dust thought to have been left by the first winter monsoon ever to cross northeastern Tibet has been uncovered by scientists, revealing the moment when the great weather phenomenon that waters much of Asia’s summers and dries its winters may have begun.

The dust blew in some 40 million years ago, originating from the same places that the winter monsoons bring dust from today. There is none to be found before this date – but dust has been deposited ever since.

Monsoons provide water for half the world’s population and occur throughout the tropics and sub-tropics, though the most powerful is the South Asian monsoon. As the summer heat grows, cool, moisture-laden air wafts in from the ocean, warms and rises, releasing its load when it reaches the cooler temperatures above. In the winter, the opposite happens with glacial winds blazing from the Arctic and blowing dust all over Asia and surrounding oceans.

But monsoons are still poorly understood, and today’s climate models disagree about how increased carbon dioxide (CO2) in the atmosphere will alter them. By understanding how monsoons started, and how this weather phenomenon and CO2 relate to each other, researchers can improve today’s models.

Scientists had thought the Asian monsoon began about 25 million years ago, but recently several independent teams published evidence pushing back the date to around 40 million years ago. It was around this time that the two continents of India and Asia collided, pushing the Himalayas and the Tibetan plateau into existence, and, sometime between 55 and 34 million years ago, Earth began cooling from a warm, ice-free planet to the bi-polar icehouse conditions of today. Professor Guillaume Dupont-Nivet, a specialist in palaeoenvironment at the French National Centre for Scientific Research (CNRS) in Paris, thinks that monsoons may have had a pivotal part to play in this cooling.

He thinks that vigorous rains caused huge wearing-away of the mountains, known as weathering. Weathering is known to draw CO2 from the atmosphere in a number of ways – for example, the resultant dust, when it reaches the sea, feeds plankton which then absorb CO2 as they grow. With less CO2 to insulate the atmosphere, the greenhouse effect weakened and the climate cooled.

‘There are many theories about the global cooling and that’s only one of them,’ said Prof. Dupont-Nivet.

To test his theory, his team has been hunting for traces of the first monsoons, in a project called MAGIC.

But looking for evidence of yearly weather events that happened tens of millions of years ago is a difficult task.

They found fossilised pollen grains from which they determined the species of plant that were there. They have tracked them evolving to cope with the change of climate and then disappearing when deserts took over. Knowing the conditions under which different species thrive, they were able to deduce the humidity and temperature in successive seasons.

The scientists also used isotope analysis of leaf wax – a tough substance that survives millions of years after the plants that secreted them have degraded. In nature, some elements occur in several forms that differ only in mass – for example there are two common isotopes of oxygen – oxygen 16 and oxygen 18 – and of hydrogen. How much of each isotope is preserved in the fossil depends on the temperature and humidity at which it thrived. This means that, when plants absorb water, it leaves a fingerprint in their tissues that hints at the climate conditions.

‘These are difficult questions when you are looking 40 million years in the past but when we combine these proxies we are able to … tell how temperature and rainfall changed with the seasons,’ said Prof. Dupont-Nivet.

In Myanmar, the weather did vary seasonally in the typical way of monsoons, though Prof. Dupont-Nivet says that other explanations also fit the data.

But the dust in Tibet ‘is a major discovery,’ he says.

‘What is very exciting is that we record the onset … There is no dust for tens of millions of years and then the beginning of it, and then there is dust until today.’

The team realised that the arrival of the dust coincided precisely with the disappearance of a huge sea that used to cover Eurasia from China to Europe. When India collided with Asia this water was cut off from the ocean and gradually evaporated, leaving behind deserts and the isolated Aral, Caspian and Black seas. Analysis of the dust revealed that it had come from this area which shows that these events changed the way air circulated, driving the first dust from these deserts towards regions like Tibet, he says.

What began 40 million years ago was a weaker proto-monsoon of what we have today, according to Prof. Dupont-Nivet.

‘It’s very close (to today’s monsoon) because we get strong winds that carry this dust and the dust has a lot of impact on the climate,’ he said. ‘It could be responsible for some of the cooling.’

‘Over the last decade or so there’s been a lot of time and money put into developing these climate models … but the uncertainty in monsoon predictions has not gone down.’

The data will help test the predictions climate models make for the monsoons of the future, he says.

Today’s big climate models cannot agree on whether climate change will cause monsoons to strengthen or weaken, or whether their time of onset will change, says Dr Michael Byrne, climate scientist at the Universities of Oxford and St Andrews in the UK.

All the climate models agree that global warming is packing more water vapour into the air which should cause a wetter monsoon. Some also suggest that, in South Asia, black carbon and sulphate pollution have recently weakened it.

But they don’t agree on the influence of CO2 on more complicated factors, such as cloud size, wind direction and the rate at which moisture-laden air from the sea rises.

‘Over the last decade or so there’s been a lot of time and money put into developing these climate models so they can simulate every part of the world in (increasingly) higher resolution … but the uncertainty in monsoon predictions has not gone down,’ said Dr Byrne.

As a result, it’s not clear whether monsoons will begin earlier or later than they do today, for example.

He has therefore taken a radical approach for his project, MONSOON. Instead of adding more complexity, he went back to the basics, depicting just a few of the fundamental forces shaping monsoons.

In fact, he has dispensed with land altogether and has built an ‘aquaplanet’. Without land to complicate matters, he can focus on clouds, CO2 and water vapour cycles.

‘The headline result is that clouds and water vapour (by absorbing and reflecting energy emitted by the sun and Earth) have a very strong influence on the monsoon,’ he said. Increased CO2 increases the amount of water vapour which ‘tends to make the monsoon stronger and wetter’.

‘But it has some other interesting effects which are less obvious. When you switch on this water vapour effect you tend to delay the monsoon onset by about ten days, which is not well known.’

These simulations show that these are important monsoon processes that to date have been almost entirely neglected, he says. ‘(And they) have great potential to possibly explain some of the large uncertainty we see in the state-of-the-art climate model projections.’

The research in this article was funded by the EU.