3D-printed living tissues could spell the end of arthritis 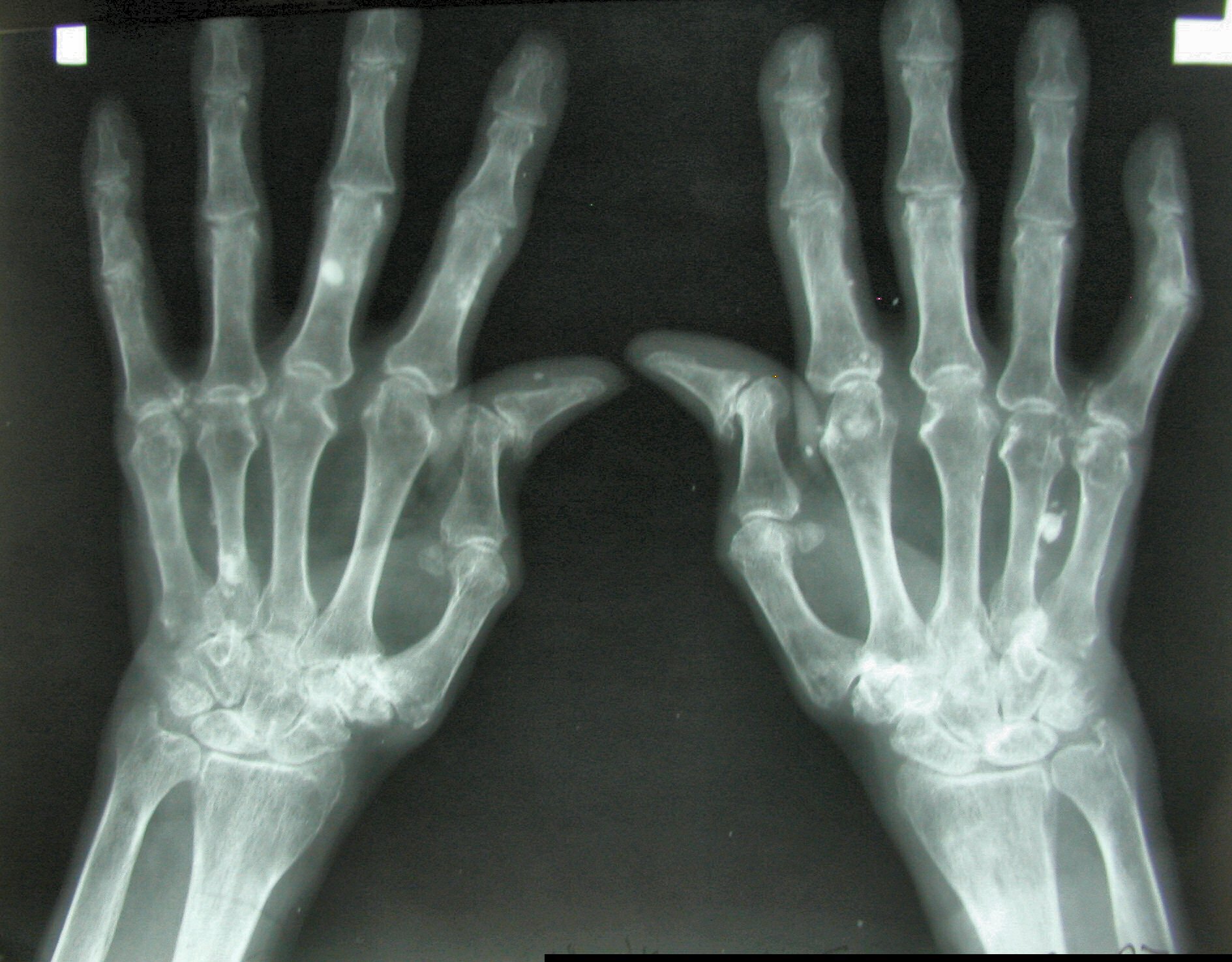 Arthritis breaks down the cartilage between joints, leading to pain, stiffness and swelling. Image credit - Jojo, picture is in the public domain

Bioinks containing stem cells are being used to 3D print living tissues that can be inserted into the body and provoke a damaged joint to heal itself.

It’s a development that could reduce the discomfort and pain of the one in 10 people who will suffer from arthritis over their lifetime. Arthritis acts by breaking down the rubbery cartilage tissue found in joints, leading to pain, stiffness and swelling.

But 3D printing technology could enable new cartilage to be printed on demand using patients’ own cells as the building blocks – a technique known as bioprinting.

Professor Jos Malda is working with such 3D bioprinting in his lab at the University Medical Centre Utrecht in the Netherlands. As part of a project called 3D-JOINT, his team is working to make bioprinted tissues that can be implanted into a living joint to replace the damaged part. These would eventually mature into a tissue that is the same as the original healthy cartilage.

Already, stem cells can be deposited by 3D printers according to a precise blueprint, creating complex tissues layer by layer. Yet that doesn’t mean they can instantly transform into new organs or body parts.

‘Printing is not the last step in biofabrication, since printing something in the shape of a heart does not make it a heart,’ said Prof. Malda. ‘The printed construct needs time and the correct chemical and biophysical cues to mature into a functional tissue.’

One challenge is maintaining the right conditions for the cellular building material.

Traditional 3D printing uses plastics, which are flexible enough to be pushed through a printer nozzle, but are also solid enough to keep their shape afterwards.

But because bioinks contain living cells, scientists are having to develop new solutions. One option is to use a hydrogel - a type of material that consists of networks of large molecules known as polymers, swollen with water.

‘For bioprinting, the material has to be able to keep cells alive. This demands aqueous conditions and processing under a relatively low temperature, which makes hydrogel-based materials ideal candidates,’ Prof. Malda said.

But while the squishy nature of such hydrogels makes them very good at delivering cells, it is also their weakness. They are unable to withstand the mechanical load certain tissues undergo in the body.

To solve that, Prof. Malda and his team are experimenting with additive materials, which can make the hydrogels strong enough to act as replacement cartilage.

‘Reinforcing the hydrogel makes it stronger – just like steel rods are combined with soft cement to create the reinforced concrete that makes the foundations of our homes,’ Prof. Malda explained.

His team is using melt electrowriting, a 3D-printing technique that combines melted polycaprolactone, a type of polyester, with an electrical field that creates fibres as thin as a hair.

Using these microfibres, the team creates scaffolding to be combined with the cell-containing hydrogel – already with good results.

'Printing something in the shape of a heart does not make it a heart.'

‘The combination of the hydrogel with the fibres acts in synergy, increasing the strength of the composite over 50 times while still allowing the cells to generate extracellular matrix and mature into a cartilage-like tissue,’ Prof. Malda said.

His team is working on upscaling that process to create larger constructs, while bringing together different materials for combined bone and cartilage tissue replacements. The ultimate goal is to eventually 3D print a complete joint.

In addition to acting as a replacement for lost cartilage and bone, printing cells in this way can also help the body to repair damaged tissues.

Professor Daniel Kelly at Trinity College in Dublin, Ireland, is working as part of a project called JointPrinting to develop such a system – quite a challenge given that the field is still emerging.

He is working to develop bioinks that are not only printable but which also spur stem cells to make new cartilage by altering the molecules that support and surround the printed cells, instructing them to generate the correct type of tissue.

The idea is that these newly printed stem cells can help repair damaged tissue after they are implanted in the body.

‘We sometimes incorporate VEGF (vascular endothelial growth factor) into our bioprinted tissues … to encourage new blood vessels to form in regions of a damaged bone or joint where we want bone to grow,’ he said.

‘We introduce gradiants of VEGF into the bioprinted tissues that directs host blood vessels (to form) into the appropriate regions of our implants.’

Though scientists are focusing on cartilage and bone, demands on joints can differ dramatically depending on where they are located in the body.

To test the printed tissues, Prof. Kelly uses specialised mechanical testing machines to determine their stiffness and elasticity, as well as computational modelling to better understand how the structure and composition of the implants can be tuned to function within specific environments.

All in all, Prof. Kelly is optimistic about the future applications of bioprinting.

‘I think bioprinting will have two main applications. Firstly, as a source of new tissues and organs in regenerative medicine. Secondly, as a tool to better understand human disease and to test the safety and efficacy of new drugs targeting such diseases.’