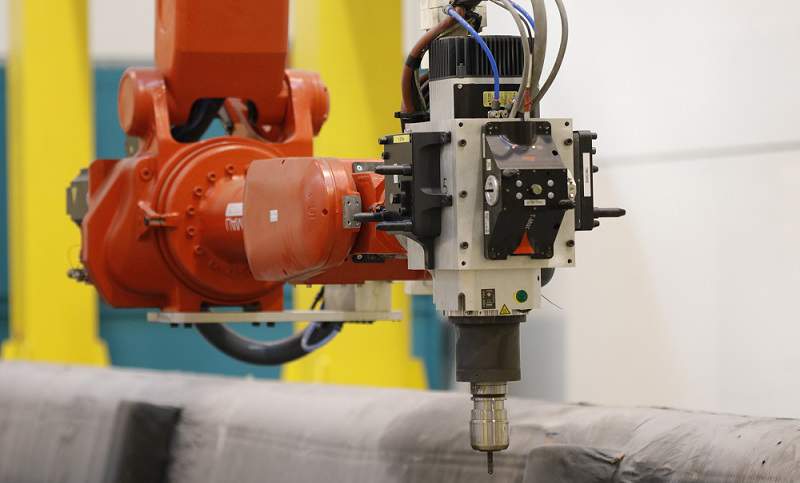 Housebuilders and makers of car parts in a few decades time may need nothing more than a large robotic arm, some raw ingredients and a programmable design, thanks to the next-generation of 3D printing machines which are opening up the technique to large-scale industry.

There are currently two types of manufacturing – additive, also known as 3D printing, where an item is built by adding material layer by layer, and subtractive, which starts with a piece of material and takes pieces away through processes such as milling and polishing until you’re left with the final product.

Now, researchers are building hybrid machines that are able to perform both types of manufacturing at once, and on a scale that brings 3D-printed houses and cars within reach.

‘We want to use the best of both technologies,’ said Jose Antonio Dieste, from Spanish technology centre AITIIP. ‘Additive manufacturing has some problems, one is the accuracy for large parts, another is the quality of the finishing. We are trying to complement this additive with subtractive in order to improve the performance.’

He runs the EU-funded KRAKEN project, which is designing a ceiling-mounted robotic arm that lays down a thin layer of a material, such as aluminium, then finishes that layer by taking away any unnecessary material, before repeating this process until the product is built.

The idea is to accurately construct large components such as side panels for cars, while saving on materials by only using exactly what is required, thus lessening the environmental footprint of industry.

‘We are going to work on medium and large components,’ he said. ‘(Now) additive machines are working on quite small parts, half a metre maximum. We are going to be able to build 24-metre-long parts.’

New innovations in the nozzles and in the ingredients should also speed up this type of manufacturing, by increasing the deposit rates of the materials, says Dr Dieste.

‘Additive 3D printing machines are very slow. In order to build a half-metre part, some of the machines need one to two days. We need to go faster. For example, a five-metre-long (car) should take two or three days maximum.’

A prototype of the KRAKEN machine, which will be modelled on a robotic arm developed in a previous project called MEGAROB, should be ready by 2019.

It will specifically be designed to build components from metal, particularly aluminium, and resins known as thermosets. However, other researchers are creating hybrid manufacturing machines that can work with other types of materials.

‘In the very long future, perhaps someday we can see a robot printing an entire building.’

Jorge Rodriguez Julián from Spanish construction firm VÍAS, coordinates the EU-funded HINDCON project which is developing a hybrid manufacturing machine that uses concrete to build up components for use in construction. A prototype is planned for 2018.

He says this type of manufacturing could be used to build almost every element of a building, from panels and internal walls to roofs, without being constrained by their size.

But, he says, there is no point in using this to build regular, plain walls of fixed dimensions as traditional techniques can already do that efficiently. For him, the biggest potential of this type of manufacturing is creating elements with complex shapes, from the architecture of non-conventional buildings such as museums to bespoke or complicated features within a conventional building.

‘When we talk about additive manufacturing in construction, we always say that shape, the form, is for free. Because at the end the machine’s costs are the volume of materials generated and time. While in traditional techniques, it is very expensive.’

However, Rodriguez Julián says that additive manufacturing with concrete is currently complex and only used in a limited way. The advantage of a hybrid machine is that it would enable elements to be built faster, more accurately and with a better final appearance, while also reducing the environmental footprint.

The HINDCON researchers are also developing new kinds of materials that could enhance the structural properties of what they produce, potentially removing the need to have a steel beam going through a concrete element and opening up new design possibilities.

According to Rodriguez Julián, the dimensions of what will eventually be printed won’t be limited by the machine but by the logistics of transporting the structures, leading to the question of whether entire buildings could be printed on site. However, he says that this is a long way off.

‘In the very far future, perhaps someday we can see a robot printing an entire building. But … there is a long way until the technology is prepared to do this, and do it in an efficient way.’

On Feb 28 the EU is running an EU Industry Day to debate the future of European industry. For more visit  http://ec.europa.eu/growth/tools-databases/newsroom/cf/itemdetail.cfm?item_id=9063

Around EUR 17 billion has been allocated to Industrial Leadership under the EU's 2014 to 2020 research funding programme Horizon 2020.

It covers everything from technology to make factories more competitive to helping finance innovative small- and medium-sized companies.

In order to increase the competitiveness of European countries, the EU is calling for national governments to ensure that by 2020 they are spending 3 % of their yearly economic output on research and development.